The Reincarnation of Pen & Paper Games

Many years ago, I created Pen & Paper Games with the vision of bringing tabletop gamers together in a way that had simply not been done before. I wanted to create a digital equivalent of your friendly local gaming store, where you could meet other gamers in your area, hang out, and even play some games in the back of the store, if you will.

The primary feature that I wanted to do better than any other site at the time was our Player Finder. Instead of just being a forum where people put up Looking-For-Group posts, you could literally look at a map of your area and click around to find other players and games that you were interested in. For the time when I launched the site back in 2007, there simply wasn’t anything else out there that could do that – I built the tool that I wanted to use as a gamer myself.

Fast forward a bit to the age of massive social media sites, like Twitter, Facebook, and its ilk. Once those exploded in popularity, I honestly didn’t see a compelling case for penandpapergames.com. We couldn’t compete the with massive reach of these other sites, and forum software like vBulletin just wasn’t keeping up. Every feature they release seemed like a poorly executed attempt at copying the giant social media sites.

So, I let the site continue on its own for many years. I even tried to find new leadership to keep it alive in my absence, but I never found any serious takers. The site withered slowly, but thanks to a dedicated core of members continued on until eventually the code base fell out of support and crashed. And, just like that the site (quite unceremoniously) was dead.

I think we are starting to see the decline of mass-social media. Twitter seems to be imploding, Facebook has been on the decline for years, and while I can’t speak for all of you…

I’m TIRED of massive corporations deciding what posts I see and don’t see based on what THEY think will drive the most revenue for their bottom line.

I’m TIRED of most of my feed being filled with “suggested posts,” and straight up advertising.

I’m TIRED of finding out that my personal data has been used for nefarious purposes with these massive companies simply turning a blind eye.

And, frankly, I don’t feel that social media ever really brought us together as a community like the forums of old.

I am setting out to reincarnate penandpapergames.com.

Not resurrect it, mind you. I firmly believe that forums like vBulletin (which our old website was entirely built on) are dead, things of the past. The goal for this site is to create a more modern (and mobile friendly!) social space for tabletop gamers that marries the functionality and user experience that we’ve come to expect from social media sites with a strong and focused community, like we had here many years ago.

There will be NO – ABSOLUTELY ZERO – algorithms deciding what posts you do or do not see.

There will be NO paid advertising on this site. None. Ever.

Similarly, there will be NO selling of personal information to third parties. This is a public forum, so I can’t stop 3rd party web scrapers from anything you post publicly, but I can guarantee that we absolutely will not be involved in selling your information to anyone for any purpose.

To that end, while the community platform software that this site is built on has support for logging in with Facebook, Twitter, Google and several others, I do not intend to implement those features as it gives those giant corporations another view point into your comings and goings on the web. That is antithetical to what I am trying to accomplish here.

Finally, I want to revitalize that feeling of connection and community that we lost in the mass social media world that set out (purposely) to divide us. Make us angry. And, stoke the very worst in us. Why? Because it drove more engagement and thus more profit.

That is not the content I want to consume anymore. And I’m betting you don’t either.

So, that’s my pitch, and why I hope you’ll consider joining this new community. It wouldn’t be the same without you!

Glad to see this potential Raise Dead action take place. Count me in… what I can do I shall.

I sent an email to Tesral. His site is still up, so here’s hoping.

Perhaps set up a redirect page at the old site and forum addresses?

Yep. I will setup a redirect when I take this site public. Probably Wednesday. I’m going to send out an email to all our old members. Just have a couple more things to finish first.

I am Eternal. Here is hopeing it can be pulled off.

Sweet! So glad to see you again, Tesral. =D You were the first person I thought of after Farcaster contacted me. ^^

How many do we have so far?

I haven’t taken the site public yet. I’m going to be sending out an email invite shortly to all of our old members.

I’m flattered you contacted me before going public.

Your description of how the old site ceased to be and the rationale for its recreation in a new form really resonates for me. Regardless of the ultimate outcome, just making the effort to create something new and better for gamers is a worthy endeavor indeed. Here’s to success upon success!

Bravo! I am so impressed by your resilience and commitment and just plain good spirit. Thank you so much for doing this.

I started with AD&D in 1977, played for about five years, then didn’t play again for about 25 years until I discovered that there were pen and paper gamers on the Internet! I think I might have even found my first gaming group in Los Angeles through the old PPG site, however, after that, I didn’t participate or need the old PPG site as much for a while.

I am thrilled it has been reincarnated, and hope that I will have enough recreational time to make the most of it in 2023.

This is great! I agree with everything you said, here. And as someone that has been looking to dip my toe back into gaming, the timing of this is on-point. Godspeed!

Hi all!
Glad to see this make a comeback. I’m looking at the browser version, and I’m a bit lost. How do I change the profile pic{{edit, found it…}}? Happy to be part of the old school reunion.
Will the player finder have filters for system etc?
Do you plan on having any sort of minis and terrain buy sell trade forum in the future?

As an ‘old’ but not terribly active member I look forward to spending some time on the new site.

Most of what I am on the hunt for though is a good place to play (I do Play by Post almost exclusively). Finding players is easier than finding stability with the tools needed to run a game purely online, slowly, over time.

Either way, thanks for reincarnating the site!

Glad to see this make a comeback. I’m looking at the browser version, and I’m a bit lost. How do I change the profile pic?

At the top right of your screen there should be an icon that has your first initial in it. 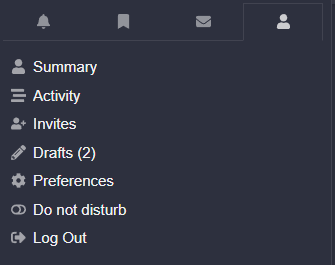 From there you should be on the page where you can edit your pic.

Thank you for this reincarnation. Like you, and probably most of the community here, I am tired of being in the hamster wheel of oligarchs. I miss the days when humans talked to each other about their shared goals and passions. I am so ready to revive my gaming after a 3-year enforced hiatus, no matter how valid it was.

I came to the old site a couple of months ago to revive my account and found what I thought then looked like a graveyard. Thanks for blowing the horn Resounding and starting this version of Ragnarok again.

Thanks for inviting me to your Reincarnation Day, and I’m really glad to see the site coming back! Your pitch sounds great. I used PPG to find many players for my games back in the day, some that I still talk to even today. Looking forward to new adventures with new party members!

Apparently Wednesday was the day, and I got it, thanks!