What are you playing? Being curious

So, just kind of curious if anyone plays any non-DnD/Pathfinder games that are worth checking out. Don’t care how well/little known it is. Mainly curious if anyone has any system or game they play when not playing the others. Personally, it’s been a little bit of Tiny D6 by Gallant Knight Games (the rare one-off with family).

Cool. Derivatives count. Like learning about new systems. Could turn it into a “What and Why?” convo, but I’m content with hearing what everyone likes playing that’s just not the big one. I’m sure everyone has their quirks about each game they play that they like.

I know the feeling.

Think I am vaguely with the Hero System. Feel like I came across it several years ago, but didn’t read enough about it to have much of an opinion.

How about the Teenagers From Outer Space RPG? (possibly the first anime-based p&p RPG in the US? first non-mecha one anyway… 1987 was the first release.)Teenagers from Outer Space (role-playing game) - Wikipedia

Or the Night Wizards RPG? So popular it spawned an anime all by itself! Night Wizard! (The 2nd Edition) | RPG | RPGGeek
It’s actually in it’s 3rd edition, btw, here’s the actual homesite: iCgEBU[hThe3rdEditionö®TCg

Or Ryuutama? If you ever wanted to RP a slice of life game, or Ghibli animation, this is probably your RPG system. http://kotohi.com/ryuutama/

How about Sword World RPG, the JRPG that is keeping D&D from domination in Japan? Ever heard of Lodoss or Crystania? Now you know the RPG they were based off of… 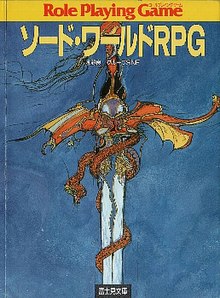 How does v6 differ from v5? I have that massive v5 revised book on my shelf.

Mostly minor changes, but the one really big change is separating the secondary characteristics from the primaries. No characteristics start with a figured value based on another characteristic. Caused a fair amount of hate and discontent at the time, but really - once characters are built - gameplay is virtually unchanged.

Caused a fair amount of hate and discontent at the time, but really - once characters are built - gameplay is virtually unchanged.

I seem to recall a fair teapot tempest at the time.

Currently I run a post apocalyptic campaign using GURPS. I personally like g
GURPS sue to the ability to make/play pretty much anything you want, and how you can develop your characters, without the constraints of pre determined classes.

I also run a Mechwarrior 2ed campaign. It’s okay, as a system, but I love the setting.

Ars Magica is also a great game, haven’t played in a while, but their magic system I’ve stolen to use in other games over the years.

My group has a couple of campaigns ‘open’ all the time, rotating through them as a GM gets a bee in their bonnet. Currently we’re doing 7th Sea, using 1st edition rules in the 2d edition setting;

City of Mist is due to resume in a few weeks (that’s the one I’m ‘inheriting’ from the previous GM who died suddenly last month(!)).

TORG Eternity awaits the GMs next surge of energy, as do Feng Shui 2, Iron Kingdoms, and D&D4. And a potential new 13th Age campaign is being discussed. Our group is a lot of fun, but sometimes we kind of suffer from group-ADD when it comes to game systems & campaigns, ha!

Think I am vaguely with the Hero System. Feel like I came across it several years ago, but didn’t read enough about it to have much of an opinion.

The freedom of the system lets the GM design a campaign world precisely the way the GM imagines the world. In a fantasy world, that means designing magic in any way you want it to work.

Thanks for the responses. It’s appreciated. Keep 'em coming!

In the past 18 monhs or so I’ve mostly played one-shots of Call of Cthulhu, with a sprinkling of other systems (Kult: Divinity Lost, Alien, and Modiphus’ Conan among them). I’ve also played in a pair of campaigns, both finished: Delta Green with one and Liminal with the other.

Both the Alien game and the Liminal campaign were unique in that they were in alternate settings. The Alien one-shot was actually a Terminator game (all the PCs were named Sarah Connor and in Police protective custody at the beginning. A lot of fun!). The Liminal game, usually set on the British Isles, took place in South Africa.

Ars Magica is also a great game, haven’t played in a while, but their magic system I’ve stolen to use in other games over the years.

I had the opportunity to play in an Ars Magica campaign. I only played once and I played as a “grog” (one of the guys likely to die). It was fun but it seems like one of those games that you enjoy when you really dig into it. it wasn’t as casual as most fantasy RPGs.

GURPS is better balanced for “normals” HERO for supers.

My main issue with either game is the degree of front loading required of GMs. I would not mnind playing at all.

I’m currently preparing to run AD&D 2E. I had to end a year long WEG Star Wars game due to several key players in the adventure flaking out for a month and a half. My games are every two weeks, so they missed 3 sessions.

My current groups and campaigns are all using D&D 3.x at current, despite some efforts to suggest otherwise. I might be able to talk them into an MSHRPG game after we get through an adventure or two with their current characters. I made them all start at first level this time around, lol! Oh, the horror.