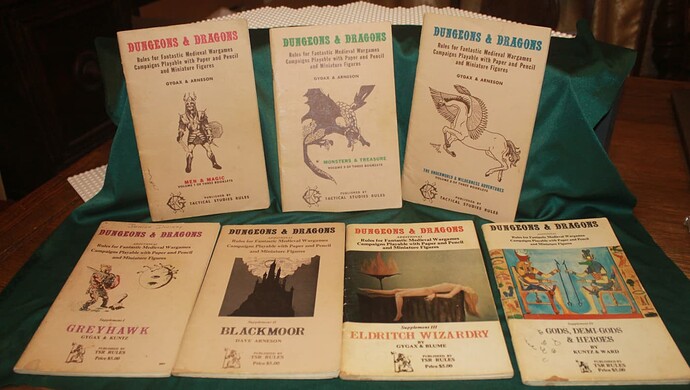 This is as old school as it gets. This is D&D, the White Box, Zero edition. All of it, the three core books and all four supplements. “Dungeons & Dragons: Rules for Fantastic Medieval Wargames Campaigns Playable with Paper and Pencil and Miniature Figures” to give the full title. And “Role playing” is never mentioned within.

The three core books, “Men & Magic”, “Monsters & Treasure”, and “The Underworld & Wilderness Adventures” run 34, 40, and 36 pages respectfully. The longest of the supplemental books is a whopping 68 pages, and digest size at that. The whole game, and all additional official material is shorter that the AD&D Player Manual, never mind the toe breaker DMG.

There were issues. In the core stats did nothing, you have them, but no advantage or disadvantage, that came in Greyhawk. To look up a monster was three places in two books. the AD&D Monster Manual was a ghoddsend we started using it before the rest of the game was out, yes, it was first at a pocket killing…$10.95, I was blown away at the size and the hardcover. This was meant to last. (It has)

So when the Old School guys talk rulings not rules it is because there was a spare minimum of rules to start with. You could read the whole thing in a casual evening. Yes, TSRish started in the 0E. So this was the game from '74 to '79. That was five years for ways and means to settle in before the pontificatingly thick DMG, and the idea that players should never look within was born. Mind you the to hit charts and the saving throws were only in the AD&D DMG. Second Edition minus Gygax reversed this, the Players Manual was the thick one.

But the genesis of Old School was set and would not go away. We were already use to our way of doing things and had no intention of changing. AD&D or not.

At least on my end the board is cutting the top of the picture.

Minor niggle, but Chain Mail would be Zero Edition while D&D White Box is First Edition.

It’s good of you to write this and explain how D&D started with the first boxed set. I never played it because I came in with AD&D 1E and I could never wrap my head around being an Elf was a class.

I inherited my Dad’s white box set with his dice (lost the crayon to color in the d20s somewhere along the way, I think it crumbled into dust).

Not sure if those first two are actually legit or not?

Could we perhaps say instead that the Chainmail was a separate game, and the fantasy add-on was instead a version iteration of Chainmail, thus when D&D was officially published as a separate entity from Chainmail, the White Box would then indeed be 0 edition of D&D?

I tend to ignore Chaimail as a seperate game - because it was a separate, and different game. From a purely D&D perspective, I look at it as one of the subsystems in the original game.

the White Box would then indeed be 0 edition of D&D?

White Box would still be the first edition since it was the first published one. I’m looking at this from a purely publishing point of view.

Chainmail (if you can find it) is a pure medieval wargame. It did influence D&D in terms of movement scale, turns and rounds. A minute is about right for massed armies, way too long for personal combat. Lord the arguments about how much you could really do in a minute vs what D&D allowed. The 6 second round is much better.

The Chainmail Fantasy Supplement (Even harder to find) is still a wargame. You get to put wizards on the field. D&D is a concept they didn’t even have a name for at the time. The term role-play is not found in the original three books. It is what it was, but not so named…yet.

There were a plethora of unofficial supplements. You could doubtless bury the official books feet deep in the suckers. I have a few of them. They are a different subject.

From a purely publishing point of view, there are like eight or nine first editions of a bunch of entirely different games. Thanks to WotC, the RPG world decided that the word “edition” means something completely different from what it means in literally any other context.

A First Edition does refer to the first printing of a given book, yes this is true. But we are talking the people that decided that a kobod was a dragony ambush and trap critter, not a Germanic mining brownie that it started out as. If folklore ever catches up with the staff of TSR they are in for a hard time indeed. They never met a folklore critter they could not steal and twist. Why should long established literary terms be immune?

You can see right where this comes from. AD&D, then AD&D 2ed Edition. That made AD&D the ":First edition, of AD&D mind you. Then Lizards called the now D&D THIRD Edition. Yes more madness. Because it is not, but it is. White box, AD&D then Lizards D&D would be the third game in the series.

Let it go. No one is going to stop, and you’ll just loose sleep.

Nah. You know that it’s entirely possible to point out that something is stupid without losing sleep over it, right? I know, it sounds insane on the internet, but it’s a real thing.

When OSR was first gathering steam on Google+ there was a challenge/notion between some of the more prolific designers to come up with Supplement "X"s adding to the the LBBs and remaining consistent with tone, design, etc.

The complete list (so far as I know it)

None of these “claimed” to be official anything. They are fan supplements

Note the wink emojis guys. @Patriot1776 is just saying what the commonly used terms (0e, 1e, etc) ought to be from their perspective.

Can these be acquired some place? They would be an interesting read if nothing else.

Let’s be honest, that was WotC. TSR kobolds were devilish little dogmen.

Steal? You can’t steal what lives in the popular consciousness as many of the folklore and Greek mythology creatures do.
Twist? That I’ll give you (esp the Gorgon*) but many monsters are faithful to the popular interpretation.
Anywho I know you were waxing hyperbolic and this is me being a pedant about it.

*Rather than the Gorgons (Medusa et al) the D&D gorgon seems closer to the Khalkotauroi.

I had the three core books but unfortunately they destroyed when I have a pipe burst and flood my basement.

I read this blog posting thats relevant to the subject at hand. 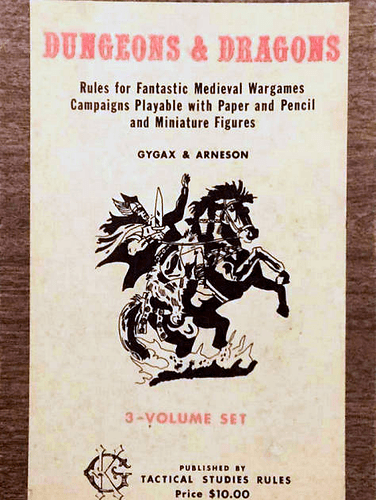 The original release of Dungeons and Dragons was a supplement.

It occurred to me recently that the original release of Dungeons and Dragon is best viewed as a supplement. Not to the Chainmail Miniature ...

"It occurred to me recently that the original release of Dungeons and Dragon is best viewed as a supplement. Not to the Chainmail Miniature wargame but to the unwritten rules, systems, and methods the miniature wargaming community of the early 70s were using.

After reading Playing at the World, Hawk and Moor, and other accounts of early miniature wargaming I had a better understanding of why the 3 LBBs of ODnD were organized the way they were. It makes sense to me to view it as a supplement to what folks were doing at the time. And why everybody else who got a hold of it was scratching their heads over the missing parts."

Archive.org has a number of them…

Dangerous delving indeed. I was sent a private link to the books, thank you.