The Rules in the Writing of Them

This is a topic about style. How do you see the style of you favorite rules sets? Core rules here. Splat book/supplements can vary widely.

0D&D: I would have to go back and read some. It has been that long.

AD&D 1-2: TSRish, stilted and pontificating. “In the writing of the paragraph thou shall use but one topic and thus shall not switch topic in the middle - nor insert sentences that are not of the topic.” Oh yes, and they bought hyphens by the boxcar load. I think they ripped the comma key off every keyboard.

I never read more than I had to of 4th, still stereo instructions.

Pathfinder got some flow back. The rules are no longer a slough. Of the various d20 offerings, (I include Star Wars and Modern) it is the easiest to read.

AD&D 1-2: TSRish, stilted and pontificating. “In the writing of the paragraph thou shall use but one topic and thus shall not switch topic in the middle - nor insert sentences that are not of the topic.” Oh yes, and they bought hyphens by the boxcar load. I think they ripped the comma key off every keyboard.

When I was taking writing courses and reading writer’s guides that’s what was specified back in the 1980s-2000s. It’s just how it was back then.

Hey, it’s fantasy and elves and dwarves and stuff. So you should try to emulate Tolkien, right? Right…?

(No shade intended toward Tolkien – he was a master of his style. But those who aren’t, well, aren’t.)

I try to write rules for all my games as “in world”, which doesnt always work out. I try to keep them minimal and intuitive. All rules should lend themselves to making resolutions short and sweet so the narrative can continue apace. My rules for Powers Beyond are about as simple yet effective as they get. 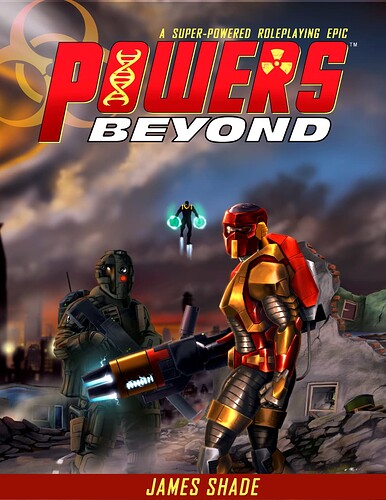 I try and write for the person that knows nothing about my game. Even I forget details coming back to the module 20 years later.

In game and avoiding meta is a good thing. It aids immersion, and that is what RPG is about.

Genesys/Star Wars: One of my favorite systems these days, but I’m not a fan of the writing style. Wordy at times, and backs into explanations of key concepts. The rules make the game’s narrative dice pool concept harder to understand than it needs to be or than it is.

Cover Ops: This is DWD Studios’ espionage game based on their “Barebones” rules. I love these rules, and they’re written in a way that reflects their barebones nature: Very clear and concise, with lots of bullet points and absolute minimal exposition.

Gumshoe: This is another system I really like, and all its games are fun to just read. Hite, Laws, and Kulp, who individually have authored the various Gumshoe system games, are all great writers who draw you into their worlds with their prose. They’re also among the best game designers I know and their approaches to the philosophy of rules within their games is imbued in their writing.

Runequest: The game’s newest edition, subtitled “Role-playing in Glorantha”, is more immersed in the lore of the setting than any edition in the game’s history, and the writing wonderfully reflects that. It often feels like it’s being described by somebody in the setting, without awkwardly saying so (a conceit that I’ve never seen work well). The descriptions of character roles, creatures and history jump off the pages with life.