Yes, I know, opinions are like certain holes, everybody has one. But, long time player, homebrewer, whatever else-brewer. Why on God’s Green Earth would I publish anything under the “new” OGL knowing it could be, and probably would be, stolen out from under me “legally?” I mean, seriously, do TPTB really think we in the gaming community are that stupid? I like money, but I don’t need it enough to knowingly let another company do this: “You own the new and original content You create. You agree to give Us a nonexclusive, perpetual, irrevocable, worldwide, sub-licensable, royalty-free license to use that content for any purpose.” Sorry. You use my material, you are paying me. Period. I don’t care if it’s a penny a copy, or 10 pennies per copy. You. Are. Paying. Me. I get they want a cut. They could have instituted 23 years ago that we can use the OGL for a few percentage points and I think most would have been fine with it. I was hoping that the “leaked” OGL was utter bs, but the silence from WotC tells me otherwise. Not sure what I will do when OneDND finally comes out, other than there won’t be an attempt to try and peddle anything I create for the system. And honestly, at this point, I’m not sure I’ll buy it. Sad to see the game I cut my teeth on turn into an apparent money grab. Just my pennies on it. I Was Wrong About The New OGL 1.1 For D&D -- It's Way Worse Than I Thought - YouTube

It’s on the same order as the Forry “license”. Bend over, spread, and LIKE it. It is required you like it as we screw you the last inch. I read that thing and said pretty much what you said here. Anyone that signs that thing is a fool.

There is nothing “open” about it. But it is always opposite day in lawyer world.

Back in the day I thought the 2e license was unduly restrictive as to the creative content, but the Satanic Panic was still fresh in everyone’s mind and TSR wanted it to be squeaky clean. The 3 OGL was a burst of fresh air that Hasbro could niot abide, garlic to a vampire. The trend just continues.

Even if they roll this back, I think the damage is done. At least the gamersphere is getting a free crash course in copyright law?

Why on God’s Green Earth would I publish anything under the “new” OGL knowing it could be, and probably would be, stolen out from under me “legally?”

I’m beginning to think that your objection is the actual intent. Other people stop making OGL content, leaving it all to WotC. I.e. 90% or higher market share.

Sure, some players and producers walk away due to objections, but the bulk of the market will just ride along. Throw in One D&D being designed to increase ARPU from players and DM’s and it’s a potentially large net positive.

The original OGL was smart business when it was released. The hobby was near dead and having a huge glut of content and support for 3.0 helped save it. Now? They don’t need that help.

It’s a business decision and the people who will quit aren’t a big enough slice of the userbase.

I think we really need to look at all of the various scenarios where in the current OGL is being used to really gauge the impact, and the possible intentions of WotC.

Did I miss scenario?

I think whotzee knows they are going to lose the Grognards and Xers, and they don’t care. Going after the 90/10 rule whales instead. I’m not their core demographic anymore.

They lost this one with the lines in 3e and not taking them out in 3.5e, I said I would never buy another D&D book from them, and have not. Any 3x books after that I have are from the used market.

Whales are rare. You need to be Husky Musky to buy everything. When I did buy many a book I was, oh a good sized porpoise. Like most of the Human race I have bills to pay and a limited budget for fun, and like most fanns too fooking many hobbies. “Do I buy this game book, or that new trilobite, or more miniatures, or another Lego set.” etc… You can’t buy them all. Not and eat as well. A roof over the head is nice too.

The more I think about this, the more I’m OK with it. WotC will change the rules and have a monopoly on the D&D ecosystem going forward. It’s their game so this is not bad.

Some folks will quit D&D, WotC, and Hasbro in protest but the bottom line for shareholders will see this as a healthy decision in hindsight. Before summer hits all of this controversy and talk will fade into the corners of the Internet and all will be happy.

These are not the reasons that I’m OK with it though. What are? The exodus of D&D players going to alternative game systems will cause a minor boom in that market. The people who quit D&D won’t cause any actual waver in the bottom line for D&D but it’ll be a very nice opportunity for other, smaller companies who will appreciate the financial boon.

As an example, Kobold Press’ announcement about their Project Black Flag plans. They are taking this moment to get the attention of folks who are absolutely going to quit D&D and will see nice product returns for this.

All of which is to say we may see an actual renaissance in non-D&D systems and games. Technically, I think that’s good news!

I totally agree with you on pretty much all points, but I wonder about the people who relied on the OGL who are now going to be in a spot because of the current license. Having said that, I think the silence from WotC and Hasbro says they are possibly reworking the agreement after hearing all the fallout and feedback. But, I do agree this (at this point) is good press for the “other guys” who have their own rules to put out.

The way Law works is they can’t rescind, the OGL says they cannot rescind. Anything done to date is untouchable. That license continues whether they like it or not.

The way Law works is they can’t rescind, the OGL says they cannot rescind.

They can. Source: Noah Downs. A licensed IP lawyer who focuses on the gaming industry.

That link is a wonderful summary of all of this from a legal perspective. It’s also written in language that doesn’t require a law degree.

I heard of a couple Retroclones that are in the process of rewriting parts of their game system that reference anything to do with OGL content and are shifting to the CC license. My preferred system is Basic Fantasy RPG and that is already in the process of identifying 3.5 SRD / OGL content, rewriting that content so there is nothing in common with anything from that SRD. 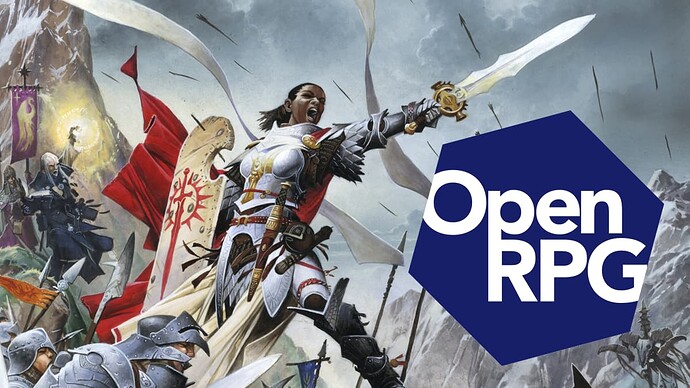 OpenRPG_1200x67511200×675 105 KB
" We believe, as we always have, that open gaming makes games better, improves profitability for all involved, and enriches the community of gamers who participate in this amazing hobby. And so we invite gamers from around the world to join us as we begin the next great chapter of open gaming with the release of a new open, perpetual, and irrevocable Open RPG Creative License (ORC).

The new Open RPG Creative License will be built system agnostic for independent game publishers under the legal guidance of Azora Law, an intellectual property law firm that represents Paizo and several other game publishers. Paizo will pay for this legal work. We invite game publishers worldwide to join us in support of this system-agnostic license that allows all games to provide their own unique open rules reference documents that open up their individual game systems to the world. To join the effort and provide feedback on the drafts of this license, please sign up by using this form.

In addition to Paizo, Kobold Press, Chaosium, Green Ronin, Legendary Games, Rogue Genius Games, and a growing list of publishers have already agreed to participate in the Open RPG Creative License, and in the coming days we hope and expect to add substantially to this group.

The ORC will not be owned by Paizo, nor will it be owned by any company who makes money publishing RPGs. Azora Law’s ownership of the process and stewardship should provide a safe harbor against any company being bought, sold, or changing management in the future and attempting to rescind rights or nullify sections of the license. Ultimately, we plan to find a nonprofit with a history of open source values to own this license (such as the Linux Foundation)."
https://paizo.com/community/blog/v5748dyo6si7v

I saw this, and was impressed. Paizo, Frog God, Kobold Press, and others have decided to do an open license so we can continue to free game. HUZZAH!!!

This moment will be remembered as the dawn of the Age of Many Systems upon which the gamers rejoiced at the Multitude of Options and Entertainment.

Oddly, I have three unread RPGs that I recently nabbed for info/inspiration. Time to get busy as the cosmos is telling me I need them more than I realized.

…annnnd WotC responded. I think folks are going to be very on guard until they see the actual OGL update(s)

It’s well worded and flowery, but why did that take so long? They gave the gamersphere 13 days to shred them. That bland-vanilla kind of reply could have been published next day. This makes me more convinced all the videos were right about their long game.

Agreed. It comes off as a rookie mistake from a company that should know better than to make such a mistake.

It’s not even their first PR-crapnado because of a poor license decision. You’d think they would have seen this coming? Maybe this was testing the waters to see how much they could get away with? Either way, noob move. Our reaction was both predictable and avoidable.