While I run Savage Worlds mostly RAW, there is one big rule I do not follow. I do not hand players their Action Cards. For a game that is supposed to be Fast, Fun, and Furious, that little extra time handing cards back and forth breaks flow, as well as causes uncomfortable stretches across the table that can knock coke cans into the dice tray. Instead, I use a status board.

The idea first came to mind during the Pandemic when I was running Deadlands over Discord. I began using poker chips to let me know PC and NPC status and was putting them next to the player’s cards. When we began meeting back up in person, I kept the system. In fact, I tried to go back to just handing cards to the players, but they objected. They much preferred what I was doing with the cards and chips in front of them. Their eyes were riveted to the status board during combat.

Over time it has evolved into this: 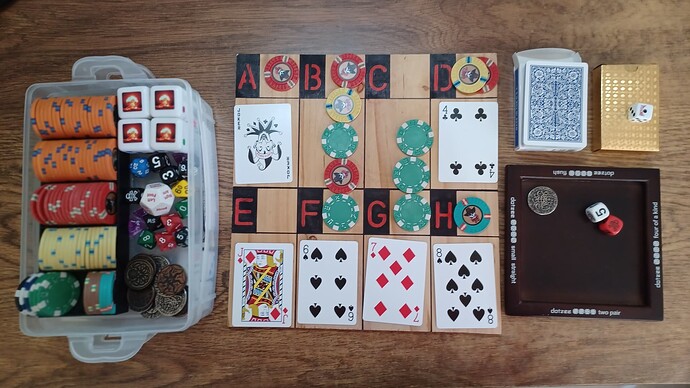 This board represents an epic underwater fight scene in Tropicana. The good guys are treasure hunting on a coral reef and are trying to dig up the remains of a treasure chest in an old shipwreck. The bad guys come in with spear guns and a fight ensures. The water is quickly filled with blood, which attracts three hungry sharks.

Don’t see it? Let me explain.

Places A, E, D, and H are the player’s action cards, placed around the board in the same way that they are sitting around the table. Player A has a Joker. Yay! He also has a red chips. Boo! That’s a Wound. They keep on stacking up as more wounds are acquired. Those stacks are easier to see at the table then in this picture.

Player D has a red chip and a yellow chip on top of it. That’s a Shaken status. Having it on top reminds us to roll to Unshake at the first of their turn. Player H down there has a blue-green chip. That’s Poisoned. He was knocked into a patch of coral and ain’t feeling too good.

The NPCs are in the center and are set up slightly different. Place F is the bad guy scuba-teers. There are five of them. Green represents the ones that are doing okay. Yellow represents the Shaken ones. The red ones have a Wound, and since they are considered Extras, that one wound means they are full of spears and knife gashes are a floating around dead.

That Bicycle six-sider over on the top of the gold card deck is a count-down die I stole from Index Card RPG. It was originally at 4 - meaning 4 rounds until the sharks got to the fight. Well, they got there and have been dealt the 7 of Diamonds in Place G. There are three of them, and they are very healthy. Soon they will be chomping at random in the bloody fray.

So that’s pretty much it. The players and I know at a glance what is going on so we can devote our efforts to describe exotic underwater Luchador attacks and other important things. I still hand out the orange bennies to the players. They love the feel and the sound of dropping them into an empty Glade candle glass when used.

In case you are interested, here is a key to the picture:

The big d6s with nuclear explosions are Conviction dice, which I hand out rarely, and usually only if someone is having a bad day.

Oh, and there is one coin in the GM’s square dice tray. Those are tokens for counting the progress in gathering all of the treasure. One coin out of three so far!

The second deck of cards - the gold one, will be used if the scene devolves into a chase.