My first experience with Savage Worlds was a bit of a bummer. I had read about the game in 2009 and it sounded very cool. Shortly thereafter I saw a copy of Savage Worlds Explorer’s Edition at GenXComics in Bedford, Texas and grabbed it. While reading the tome, the binding cracked and all of the pages fell to the floor like leaves in autumn.

It wasn’t all that bad, though. I wrote Studio 2 Publishing, Inc. about it and Jim Searcy sent me a spiral bound copy of the book as a replacement. It laid flat on the table, which was great.

Thirteen years later, I have an entire bookshelf devoted to Savage Worlds: 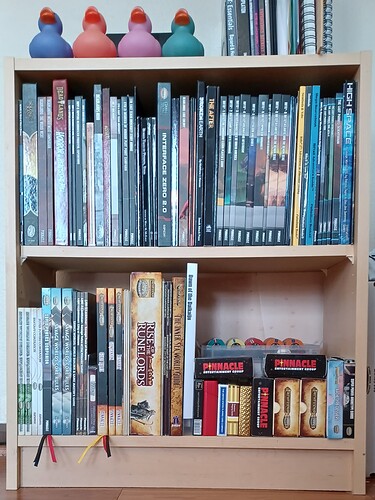 That doesn’t include the plethora of pdfs I’ve got from DriveThruRPG and Pinnacle itself. Of course, I haven’t gotten to play all of those games. What I’ve got real life experience with is:

I’ve also put a considerable amount of work into creating a Savage Cepheus book based on Traveller.

Savage Worlds has been one of the best games I’ve come across. The most recent version, Savage Worlds Adventure Edition (SWADE) has become my favorite game of all time. In fact, when I see a new game that looks cool, my first though is how to adapt it into SWADE. Well, except Five Parsecs from Home. Great fun, but that’s not really an RPG anyway, is it.

I’ll be digging deeper into Savage Worlds in future blog posts. If there are any areas that you’d like me to focus on, let me know.

I like SW as well. I’ve only run a short-lived Deadlands game, but I have a ton of materials (mostly pdf). I’d love to run/play Streets of Bedlam, Agents of Oblivion, Interface Zero, or either of the Weird Wars if I could find a group.

Hadn’t heard of Streets of Bedlam. Just bought it. Looks awesome. How the heck had I never heard of it? And why no POD? Arrrgh!

Cool choices. I hope you find a group!

Savage Worlds has definitely spoiled me for other systems, especially from the GM side. I now look at other systems’ combat sections and if I see “hitpoints” or some other attrition based mechanic on the GM side, I think of how I can convert it to Savage Worlds. There are some minor things about Savage Worlds that I don’t like but it has become my go to system.

Savage Worlds has never been my cup of tea, but I did play three campaigns (all set in the same world, several thousand years apart) with an insanely talented GM. He’s the kind of guy who’s an absolute genius at world building, characters and plotting. So, I never cared for the system in and of itself, but with the right GM, it’s a brilliant system.

There was a really awesome Ghostbusters mod for Savage Worlds back in the day that I still think about all the time. It had a system where you could take more gear as you advanced, and your local franchise as a whole would get access to better equipment. I ran a campaign where I had the players deal with real local ghost stories, it was a ton of fun.

Savage Worlds has had some of the best settings I’ve ever had the pleasure of experiencing. Hellfrost, 50 Fathoms, Necessary Evil, Deadlands…

There used to be a site that had hundreds of free, player-made settings for Savage Worlds, does anyone remember it? I think it’s been lost to the sands of time.

@Arkhein your shelf is very impressive, thanks for sharing! My first copy of SWEX fell apart too, lol. Looking forward to your future blog posts.

Yeah @GregBruni , Savage Worlds certainly does have some bits and bobs that are not to my taste. But what keeps me (and the rest of the gang) coming back is the core resolution mechanics that accentuate the way we want to play. I want crazy randomity in my fights, which Savage Worlds delivers in abundance.

Yeah @Lodisy , a good GM can make just about any system fun. Just out of curiosity, what are the bits of Savage Worlds that don’t bring you joy?

Thanks @FlashFlood . That Ghostbusters mod sounds really cool. I think I remember that free site from way back, but yeah, haven’t’ seen it in forever. They had a bunch of Savage D&D kinda stuff and . . . wasn’t there some sort of Alice in Wonderland type fo adventure there?