I was perusing Reddit today and saw the meme below: 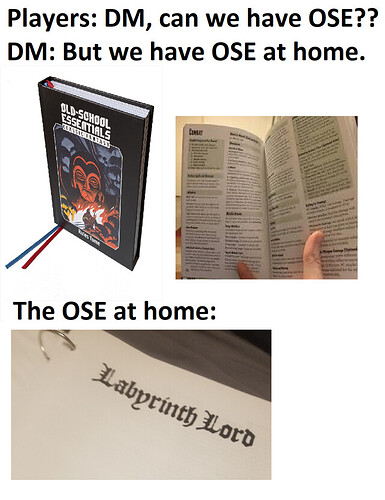 I smiled and sighed because I started my OSR journey with Advanced Labyrinth Lord and just yesterday ordered OSE.

Damn, It’s well laid out. Damn, I love the the art. Damn, just in an hour I’ve learned more about Moldvay/Cook than I have in 40 years - and the originals are staring at me on the shelf still. And this Intro module, The Hole in the Oak. Love it.

My go-to Savage Worlds is great, but it’s not the greatest for a random pick-up game. At least not with my players who hem and haw for an hour crafting the perfect Novice character. And there comes a time when not everyone can show up on game day and the game is at some ultimate crux where all players are needed for the narrative or the boss fight or both. So, yeah, I’ve been thinking about an OSR solution and apparently - here it is.

When my daughter was young enough to realize I was going off on Saturdays and playing games without her, I made a deal that she was old enough, I’d let her play with the gang. I think she was about 8 when she had her first taste of 4e in a group. Eventually I tired of 4e. It never hit quite the right buttons.

Then I heard about the OSR and Advanced Labyrinth Lord and switched to DMing that. Over the years, I had my daughter investigate as many rpgs, and D&D versions, as we could muster. Around town we played 2e, 3e, 3.5e and Pathfinder. Conventions were great for other versions. There she played 0e, Moldvay/Cook, and Mentzer with Frank himself. Matt Finch signed a copy of Swords and Wizardry Complete, gave it to her for free, and DMed us and like 18 other people though a game - a game with an actual frikkin caller, no less. She played games with David “Zeb” Cook and J. Eric Holmes’ son.

Oh, and did I mention that her character was killed in Metamorphosis Alpha by Jim Ward? She had the RPG childhood I always wanted. A lot of good memories there for the both of us.

Yeah, I bought OSE, even though I had it at home. So sue me.

My go-to Savage Worlds is great, but it’s not the greatest for a random pick-up game.

Savage Worlds character gen is pretty fast, but I guess I have the advantage of being familiar with it already. Maybe some archetypes/templates to hand out to players to start with would help. That way they would just need to tweak it to their liking.

Two of my players have a heavy dose of analysis paralysis when building characters. Too many choices, probably. Yeah, templates or archetypes might help in that regard.