Lizards of the Coast

There was to be a cartoon at the top of this. I could not find it. The capion being “I said wizard, not lizard you stupid stalker!”

Well that cartoon and an incident in my game is why I say “Lizards of the Coast”, that and they pissed me off a few times.

The incident was a 2 AM game, we have all been there and Var had not the wit to cast 7th level spells. He got himself a wish, it being toward the end of a long session and 2 AM the player said “I wish I could cast seventh level lizards!”

After we picked ourselves up off the floor, because at 2 AM everything is that funny I went with it. Var could cast his level in 7 hit die lizards a day. Those that survived an encounter would follow him around. Are you messing with the guy that has a Komodo dragon gang?

The Wizard/Lizard connection was permanent. When Wizards of the Coast pissed me off with those damn lines behind the text in 3e, I stated calling them Lizards. The habit stuck. While I hold no active animosity toward the company a habit made is generally a habit kept. So Lizards of the Coast it remains.

And don’t mess with Var… 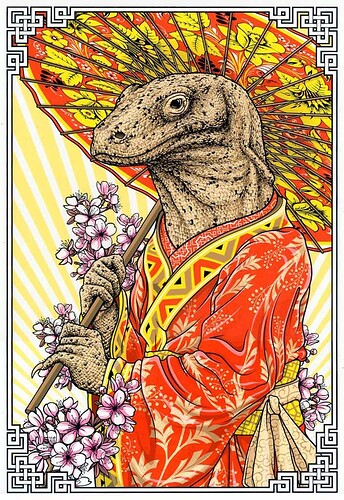 You may dress your dragons however you can wrestle them into.