What is that? That is an encounter from the ancient days before personal computers, or monsters with stats. Yes, I still have legal pad sheets with this kind of thing on them. I have been playing since before personal computers were a thing, and long before the internet. The particular one I pulled that off of has marks through the hit points. I used the thing at some point.

It came out of a folder labeled “A-1 Used Encounters” It has everything from those old legal pads to dot matrix printer, to my first inkjet. I have a habit, good or bad of not throwing things away. So from hand written to the C=64, Amigas of every age and a number of Linux machines. I don’t think the Linux machines as I got the first color laser when I was daily using an Amiga 4000. I’m a nerd for DTP. I had a 24 pin dot matrix color printer. I’m that kind of nerd.

The below sheet is in my Monstrous Compendium, It was printed with a Citizen 24 pin dot matrix printer from an Amiga 1200 computers. 2ed Edition so not pure old school. But we were using a typewriter when AD&D came out. Talk about my lousy typing, composing directly on a typewriter. It was barely readable. Those I threw out. 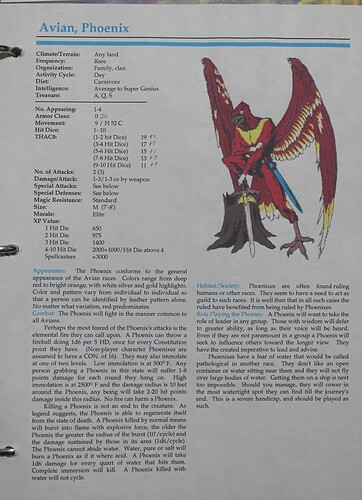 Oh! I remember having that ring-bound Monster Manual! I hated that thing. Not because of the content, but because I ended up accidently tearing so many pages out of it.

It is fragile, which is why they ditched the idea. Mine is re-enforced with clear duct tape al over. I loved that I could edit and add to it. The three ring binder on the other hand…