WotC responding to people getting all kinds of alarmed:

We love the interest and passion the community has for D&D. We love D&D, too. So, when we see the D&D community concerned by rumors and misunderstandings, we want to clear the air and share the facts with you, even if it’s a bit earlier than our original plan. You all matter to us, and we want to provide transparency on how D&D will continue supporting third-party creators.

tl;dr: They are making some changes, but really it’s not any different than what’s already known. The financial disclosure being the most visible new thing to my eyes

Cool - thanks for the heads up!

tl;dr: They are making some changes, but really it’s not any different than what’s already known. The financial disclosure being the most visible new thing to my eyes

There were a couple of other things that they called out in their announcement. Chiefly that the agreement applies only to specific media (print and static digital) and that they expect to be paid royalties by those (few) making over $750k per year.

I’m wondering about enforceability. Publishers like Kobold Press in the past made the decision not to release content under the OGL, but they were still able to release “compatible” products based on the limitations of copyright as it applies to game systems. These “fewer than 20” that they talk about might decide to do likewise.

I suspect it will come down to the what the publisher feels their needs are. As you’ve noted, limitation in Copyright provides an avenue to publish compatible material without using any version of the OGL. What using the OGL does though is allow you to make use of a lot of very D&D specific terms (like monster and spell names).

So this took on a whole new life and level of potential concerns.

This blog does a great job of being rational in the approach and summing up what might happen, or not, from a legal perspective. It’s a good read because of that legal focus - it avoids the dramatics.

On the dramatics side, wow… bold of WotC and Hasbro to go this way. Bold.

There might be a situation that people who have published a product under the OGL 1.0A could be sued for removing the OGL information from their products.

It could be viewed by a court that their previous inclusion of the OGL is an admission that the product is referential to WOTC and would thus continue its connection even if rewritten.

I don’t know for sure if that would be the case, but it seems reasonable to be concerned about it for those invested in publication.

Might be time we all agree on a new mothership system and start fresh. Leave WOTC in the rearview.

I think whether or not this stance would work for WOTC comes down to if the game ever made claims which directly stated or implied that the game was solely created as a clone of D&D. If instead, they only claimed to be “inspired by olds school games” or “roleplaying games games of the 1970s and 80s”, or if they only referenced using the SRD, but didn’t claim a direct linkage to WOTC’s game, they may be fine so long as they don’t include quoted SRD content, or use a “look and feel” that intentionally matches D&D. If they portrayed themselves as an original game which took stylistic cues from games LIKE D&D, they might be safe from WOTC lawyers.

Then again, any company or game could be targeted by WOTC lawyers, no matter how close or distant in similarity to D&D it is, because ultimately WOTC doesn’t need to WIN a court case, they just need to make it too expensive for a smaller company to be able to stand up to them.

The mechanics behind any RPG system are fair game for anyone to use / copy to their heart’s content as they cannot be copyrighted. A bunch of videos popped up since the beginning of the OGL 1.1 debacle from various dnd-enthusiast lawyers.

Even Legal Eagle jumped in on the debate… 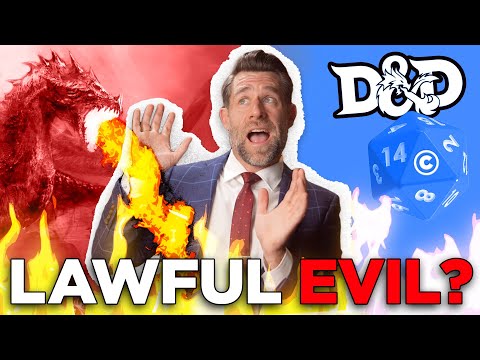 A new “leak” shows what part of WotC’s plan may be. Though this image from Twitter claims to be a confirmation of leaked info, we won’t know for sure until changes are officially announced and/or implemented. 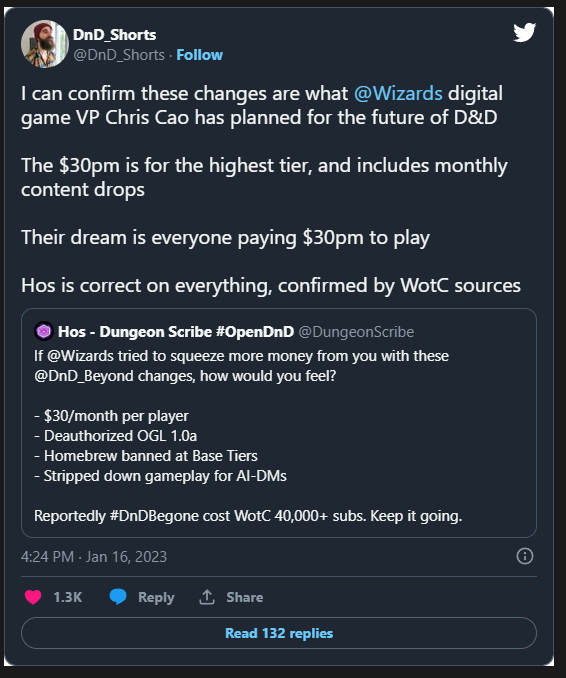 I wonder what stripped down for DMs means

It seems, from this, that they plan to implement AI GMs for some play, rather than real live people. Which… If I wanted to play a video game, I would. And still not for $30/month USD.

ETA: And possibly AI players for games that are shy of participants? It’s not specified here, but it’d be a logical step.

Cutting their own throats. They do not have even close to a monopoly, even on things called D&D. 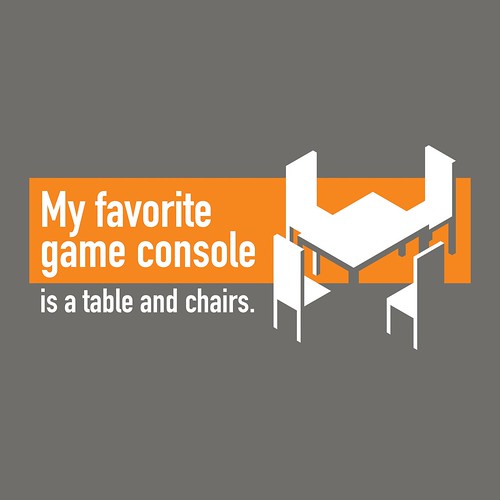 $30 a month? Seriously? I don’t spend nearly $360 per year on RPGs, and that’s including miniatures.

No wonder they’re using a smokescreen of false claims of trying to prevent NFTs, blockchains, homophobia, racism, & whatever other -isms & -phobias as justifications to go back on their word by breaking the terms of their own license and revoking the OGL 1.0a. Their claims of trying to foster an aura of inclusiveness are just false platitudes. The OGL never allowed for any use of their IP in any way shape or form with or without any of the above things.

With OGL 1.0a still in effect there no way this plan would have any hope to be successful, someone would just clone D&D1 & Wizbro would lose a significant amount of their market like with 4e, the GSL & PFRPG 1e. That’s why they want to kill OGL 1.0a & either cut out all the 3PPs or bring them to heel.

Are there even any MMORPGs that charge anything close to that? How many people do they realistically think are going to be willing to pay $30/month, that’s $360/year, for a not quite MMO?

Do they have any idea that the strength of TTRPGs are that they are only limited by one’s imagination? With this not quite MMO is it going to be that if the developers & programmers didn’t think if it your character can’t do it?

I hope the mass cancellations of D&D Beyond subscriptions continue, Hasbro’s stocks tank & that Chris Cox, Cynthia Williams, Dan Rawson & the rest of the upper management of Hasbro are thrown out into the street for trying to destroy the TTRPG industry in their pursuit of filthy lucre.

The “leak” is being reported as fake by someone who claims to manage Wizards online content. But of course that could also be fake.

In any case, given the quality of some other D&D fakery from the last year, it’s hard to know how much of anything we’re seeing is in its final form. I’m maintaining a wait-and-see attitude, but enjoying the show in the meantime. I have no vested interest in D&D specifically beyond grognard nostalgia.

I saw a figure of 40k subscription cancellations, and a figure of 10 million current subscribers. If that’s all true, Wizards isn’t likely to make changes to accommodate that .4%. Bad press will blow over, and a lot of people just don’t care one way or the other.

I suspect that upper management is looking at the D&D movie and upcoming live action show as a way of appealing to large numbers of younger folks and non-players, thereby growing their customer base. Getting kids in, kids who already live with subscriptions, micro-transactions, and doing everything online (like my college-aged nephew), might be seen as the future of a heavily-branded, fully monetized D&D. Can’t say I see that working, as the TTRPG community isn’t the same as the video game/e-sports folks. But a lot of us are aging out, and our opinions aren’t as interesting to businesses. My nephew isn’t likely to get a subscription now because he and his friends are having a hard time playing regularly (they’ve just entered college), but I bet he would if he used it every week, and I know he doesn’t care about game system diversity, the OGL, 3PPs, etc. If Wizards can win him and his friends, losing an equal number of grognards is a win.

a lot of us are aging out, and our opinions aren’t as interesting to businesses.

I think this is a very important truth that a lot of people in the player community kinda ignore. I see a lot of my fellow grognards celebrate that they have all the books they need, haven’t really bought much in years, and will absolutely boycott WotC over this.

If you aren’t buying things the bean counters don’t care about you.

This is why the cancelled subscriptions do matter. It changes the bottom line.

Ultimately, this will all calm down and whatever they do will be focused on the potential customers they can acquire via the brand activity. They won’t focus on people playing 1st, 2nd , or 3rd, 4th, or 5th edition. They will focus on sales.

tl;dr: The brutal truth is that the potential market dwarfs the existing market, Pathfinder and all, and Hasbro is going to double down on that.

I don’t buy splats, but I do buy dice and minis like I breathe because of it. WotC decided to force my hand by turning books into a “LiVe seRviCe” instead of waving tasty tasy minis and mathrocks under my nose. Their call.

A new “leak” shows what part of WotC’s plan may be.

Think about what that means this time of year when games are harder to manage. If you don’t game at all in December-January (like me, right now) you just paid $60 for absolutely nothing.

That’s exactly it: gaming as service, not product. It’s a model adopted by a growing number of software providers. Adobe, Office, etc etc etc. Even Sibelius, which is music notation software, went to a subscription instead of something I can own outright - peeved a lot of people, but that didn’t stop them. If competitors adopt the model, there winds up being no choice - subscribe to someone or go without. Of course, this has driven many (like me) to freeware solutions. For instance, I use LilbreOffice instead of Office, and MuseScore instead of Sibelius. (How long freeware can stay free is a great question.) There sure are lots of other games I can own, and clones of games, and clones of clones…

I get it. A subscription model looks like the only long-term viable alternative to a product that has no inherent obsolescence. Heaven knows they don’t put out enough new content to make a profit (probably afraid of the setting glut TSR had back in the day, though I’d argue that this is a very different gaming world than it was in the 90s). Putting out new editions every few years is one approach, but costly and likely to drive away a percentage of customers who don’t want to change. At least with software there are reasons to upgrade - because upgrading, improving, is a real, measurable thing. But games? A new edition isn’t an “upgrade,” it’s a different product altogether, a matter of taste, not of objective criteria like “it runs on Windows 11” or “we fixed a serious security flaw.” So… I get it.

Maybe I’m just an old fart. I like books. I like sitting at a real-world table with friends and chipping in for a party pizza. I like buying stuff, not renting it. I love computers - for computer stuff, but D&D and all my other beloved games aren’t computer stuff. I mean, they’ve got “TT” right in the name.

Yea, ProTools going live service gave us Reaper. I expect D&DOneVTTtm to do the same.