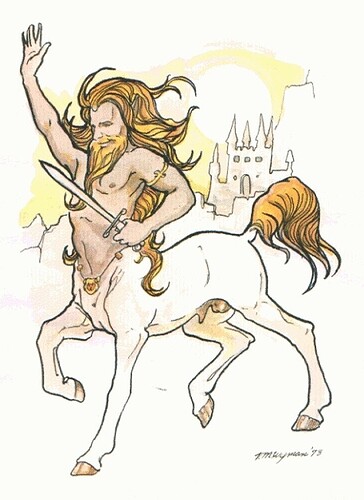 The oldest character I have. I was taking the play anything literally and I had just bought a centaur figure. I wrote him up at the con. I took that one home, and played Coran for years. The art shown here was done by Vicki Wyman in 1977 at Balticon14 on Baltimore, Ma. I went to meet Ann McCaffery, which I did.

Coran became an important character as the game progressed, epic tales were told as the time he held off the Pit Fiends of Asmodeaus as friends rescued Li’ona. His sword Fiendslayer was named that day. 50 fell to his blade.

He ascended to be the god of Centaurs and Blacksmiths. Something he remains in the game.

The character has been played and enjoyed for those long 46 years. I have more art of him than anyone else. Three minis, two drawings. Characters can last, they all do not go down the tubes of games and memories. 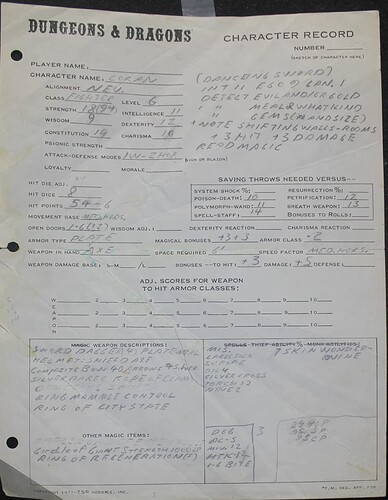 Last addition to this, my most recent pictures of Suszan and her husband Coran the Golden. These hang in my bedroom, framed. Might be NSFW, tasteful nude. The art is by Megan Giles. 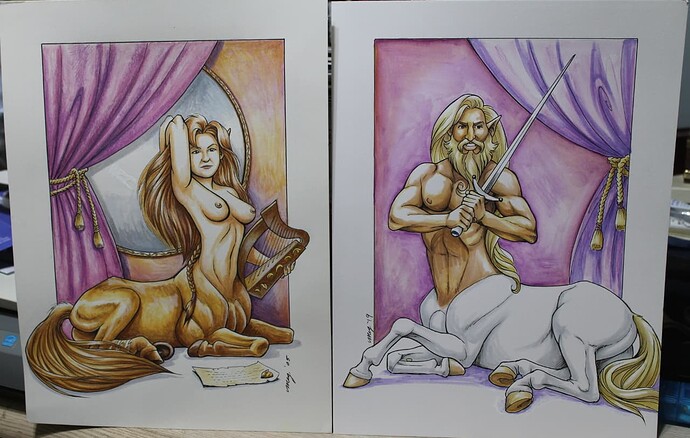 Not that there were exactly rules for this. Gods Demigods and Heroes had particularity wimpy gods. The later AD&D Deities & Demigods was not much better. TSR pontificating to keep your characters below the gods. We raised the gods to something, well, godlike.

The whole idea jelled with a Lizards pre D&D book The Primal Order. It had the idea that gods were something more than mortal, “primal”. We adopted this and once Lizards took over D&D they used their Primal Order for the gods. It was a case of my game backing into the idea before it was D&D official. My son was telling me about the new system for gods and my brain is “:This sounds familiar” and it was.

I don’t have the 3e god book. Time to hit the used market.

PS: I have another picture of Coran and his Wife Suszan, if @Farcaster lets me post it.