There is an optional mechanic in Savage Worlds called the Adventure Deck. I’m sure you could play for years without ever using it in a game. From the moment I first saw it, though, it’s been in every Savage Worlds game I’ve run. 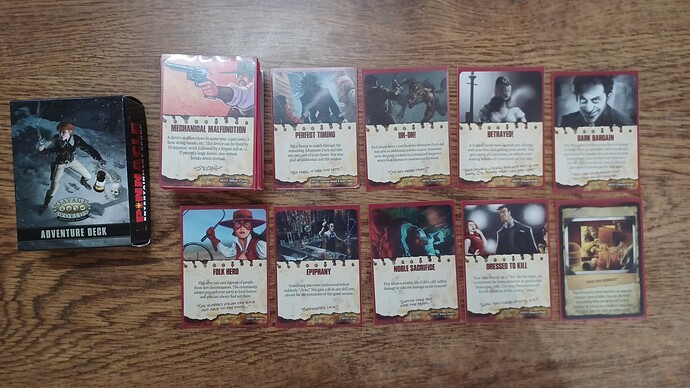 At the beginning of a session, the GM deals Adventure cards to the players. One per player at Novice rank, two for Seasoned, and so on. They can only use ONE of those cards per session, however. Well, unless a card or ability says otherwise.

The Adventure cards give players some sort of advantage when they play it in game. It could add damage to a specific attack, or make an NPC’s attitude towards the player improve.

I really enjoy using the Adventure Deck. It can change the flow of a scene or a fight in dramatic ways. The card NOT TODAY changes any successful attack into a critical failure. ADRENALINE SURGE gives the player an additional and immediate turn. HERE COMES THE CAVALRY has help arrive to the players in one form or another, and OUT OF THE FRYING PAN allows the players to escape the current predicament, only to lead the players to a worse problem devised by the GM. My players will actually play that one!

Pinnacle has published several versions of the Adventure Deck over the years, sometimes printing specific decks for various genres. Recently, they have been printing additional cards to go with setting books like the Superheroes Companion. I have combined the current SWADE deck with cards from to the Savage Worlds Explorer’s Edition to make my own.

Some of the cards are pretty powerful, and some cards could be very disruptive to a campaign. I suggest a GM curate the heck out of their Adventure Deck to make it fit the game, the specific session, and the players.

For example, there are many cards that help with arcane skills or refresh power points. In a non-magical settings, those cards should be set aside.

Some cards tend to bog down play. An example of that is PERFECT TIMING - which allows a player to dig through the Adventure Deck and take a card. I know my players. Some would take ten minutes reading all the cards. I nip that in the bud by not including the card in the first place. (And they actually agree - go figure.)

And some card bans should be session specific. Allowing the UNEXPECTED INSIGHT card in the deck, which allows a player to ignore any invulnerability, might fizzle the excitement out of that boss fight with Dracula.

Although popping the GMs bubble isn’t always bad. My players have asked to not have to show me their cards until they play them. I said sure. The thought is that if I know the cards they have, I might consciously or subconsciously change what I was going to have happen. Like in a recent game I set up a treasure hunt where the players would have to do a lot of searching - make a mini game out of it. Then they plopped down the WINDFALL card, which allowed them to immediately find everything that could be found in that location. Well, so much for THAT mini-game. But the triumph in the faces of the players who had gotten one over on me made me chuckle.

So, yeah, go check out the Adventure Deck if you haven’t. It’s an important part of a balanced breakfast.

That could be useful for other that Savage Worlds as well.

Very cool. I’ll have to check that out. Do you know if they have added that to their VTT suite?